In this episode of Audience, I sit down with Jack Rhysider from the Darknet Diaries podcast and dig into his journey promoting his podcast.

With +200K listeners and counting, Jack is not only the host of an insanely popular podcast but he also talks transparently about how he grew a following using strategies any podcaster can leverage.

Ahead, we picked out few key topics from his interview that can help take your show to the next level. We explore Jack’s research on audience tipping points, effective podcast promotional strategies to build a loyal following, and what changes after your show starts to grow on its own.

When you’re done here, tune in to the full episode for more from Jack Rhysider and his trajectory to building a successful podcast.

What Is The Podcast Promotion Tipping Point?

A tipping point is a series of small changes that become significant enough to cause large, important change. Some would argue podcasting in general has hit a tipping point, entering into mainstream as over 50% of Americans have listened to a show.

Starting out from scratch, Jack began his podcast promotional brainstorm asking “How much do I have to promote my show until it starts growing itself with its own momentum?”. Essentially he wanted to know how many loyal listeners did he need to attract before he hit the tipping point.

Asking marketing experts and fellow podcasters turned up nothing so he set out to discover the “magic” number himself. What he found was at about 150 passionate followers, things started to pick up and the slow growth drip turned into a steady trickle.

Bolstered by evidence found by Malcolm Gladwell, Jack stumbled upon the right number of listeners that would take his show from under the radar to the mainstream. At the 150 person tipping point, he didn’t see a dramatic, sudden increase in listeners. Instead, after pushing the boulder of growing a podcast audience on his own, he felt there was now a few extra hands to handle the weight. These hands would help drive incremental growth, provide more legitimacy to the show, and ultimately make Darknet Diaries the go-to podcast on the underbelly of the internet.

But how did he find those 150 engaged fans in first place?

Effective podcast promotional strategies are all based on one common truth. If you’re passionate about the topic and believe in the value your podcast provides, it’s far easier to promote it. In this episode, we build off that concept and dive into four actionable strategies that helped grow Darknet Diaries into +200K listeners strong.

Tune in at 13:55 to hear Jack explain how he leveraged each of the below strategies to promote his podcast. 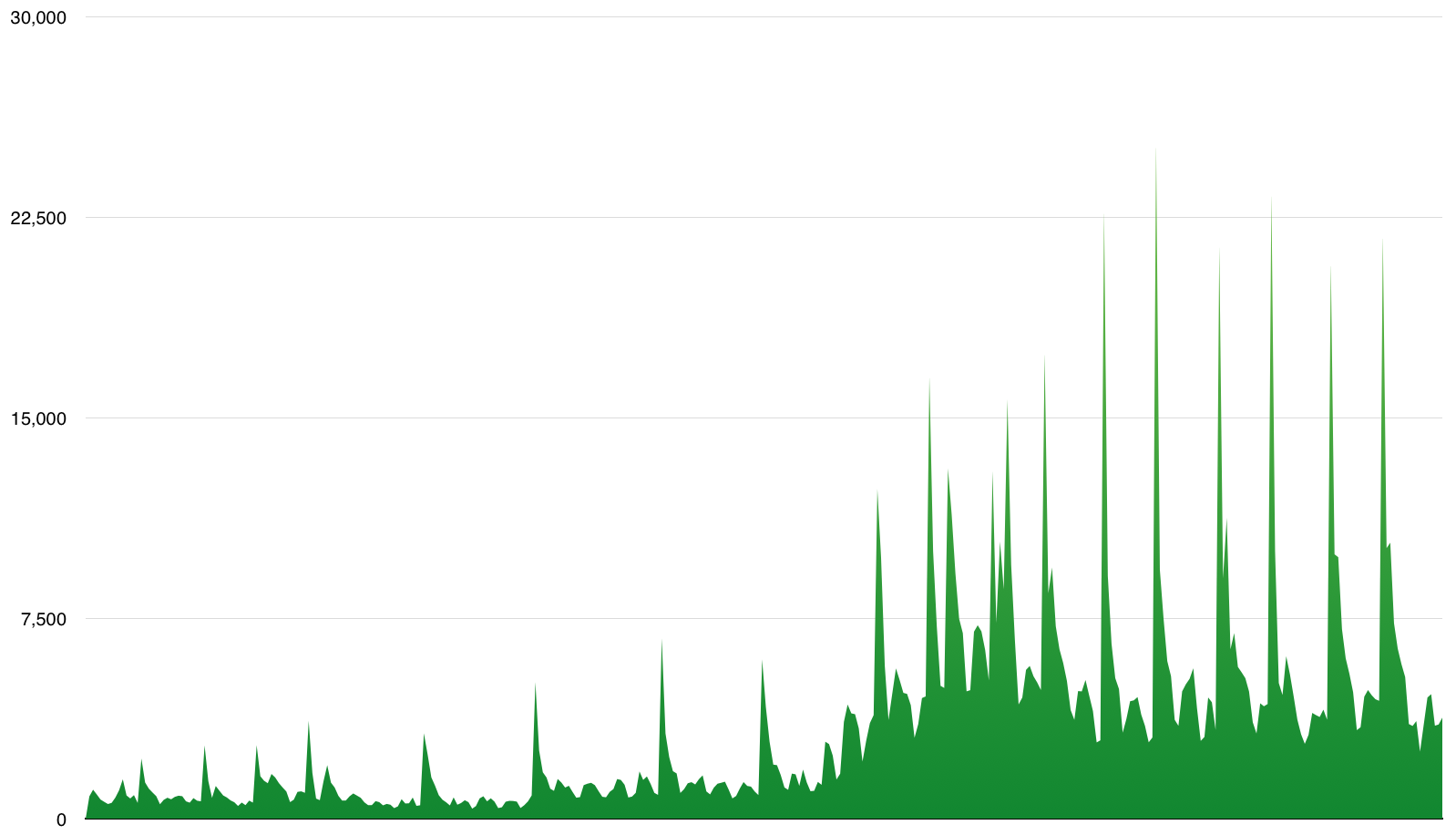 Darknet Diaries downloads per day in 2018.

You’ve heard it before, but we’re saying it again. The foundation of growing a podcast audience is extraordinary content.

Jack reiterates this point saying, “No one recommends a good podcast, they only the recommend great ones”. He charges his audience for setting word-of-mouth recommendations in motion but highlights that can only happen when a podcast is better than the rest.

He recommends reading Out on the Wire and consuming as much information as possible about podcasting. Being intentional about improving your craft will offer long-term benefits and only advance the show forward. Jack iterates his point saying, “You just can’t pick up a mic and think that you can be Joe Rogan the next day. There is a long road between here and there.” Preparation and practice goes into every great podcast.

Anytime we start something new, there’s a learning curve to mastering each skill. Podcasting isn’t any different, so use those early days to your advantage. Ask your audience, even if it’s only friends and family, questions about what they like and dislike about the show. Process the critical feedback, make tweaks, and continue striving for a more polished show.

Jack suggests getting specific. General questions or critiques won’t help here. His favorite question to dig further is always “When did you stop listening to an episode?”. This one question helps him zoom in on exactly where his audience disengages so he can make edits to future episodes.

3. Once you have something great, set it on fire

Connecting with journalists, podcasters, YouTubers, or anyone with a large following in your niche is critical to reaching the tipping point. Pitch your show or specific episodes to the influencers in your industry for the opportunity to be introduced to their audiences.

But remember, it’s a numbers game. Jack recalls reaching out to 100 people and only two gave him a shot–but they were two big fish. Getting written up in The Guardian and tweeted by an account with 2M followers gave Darknet Diaries more legitimacy. Even though it didn’t immediately bring in thousands of followers, the podcast was now recommended by two influential people in his community. Not bad for a 2% response rate!

So I've been listening to Darknet Diaries, a podcast about…the kinds of shit I tweet and oh my, you are all going to love it https://t.co/gQ8EaXOiXU

4. Self promotion is your friend

Self promotion can feel slimy and uncomfortable. But by all accounts, it’s an imperative part to effectively promoting a podcast. But when your podcast is a passion and you genuinely believe in the content, your dedication becomes palpable and your sales pitch turns into an authentic exchange.

Conviction about the quality of your work makes promoting your content much easier for those of who are uncomfortable with promotion. Tune in at 20:50 to hear Jack’s process in getting over feeling weird about self promoting his podcast.

What Changes When You Hit The Tipping Point?

It’s easy to think that once a podcast hits its tipping point, the work will get easier and you can go on auto-pilot. Jack tell us that isn’t so.

While less resources are spent promoting each episode, more time is going into the show’s production. Always striving to introduce unique and engaging content to his audience, Jack has started hiring a team to help produce Darknet Diaries. Extra hands handling the production will allow him to focus on telling more interesting stories, whether that means investigative journalism or interviews with hard-to-nail-down experts.

But even with reaching the tipping point milestone, he still connects directly with his loyal fans to continue to stay in tune with what they want to hear.

Jack’s interview on Audience is chock full of actionable information on podcast promotion and how to build authority in your niche.

Listen now to learn more about tipping points and how Jack went about discovering how many avid fans he needed to put his growth on auto-pilot.

After chatting through the strategies he used to grow Darknet Diaries, reiterate the importance of engaging content. Jack walked us through how he finds and develops real-life events into interesting episode content. From Google Alerts to getting over the fear of publishing a less-than-stellar episode, he offers legitimate advice on what it takes to find and tell compelling stories.

And if you’re curious about how Jack produces Darknet Diaries each week, stick around for answers about his podcasting workflow. He lets us peak behind the curtains of how long it takes to finalize each episode, why he makes certain editing choices, and how pitching a potential guest for 8 months can lead to one awesome story.

At the end, we bring it back to the importance of nurturing a community within your audience. How building street cred within your niche and fostering direct connections with your most loyal listeners can deepen connections and bring a podcast to the next level. On this episode of the Audience podcast, Stuart chats with Jenny Turner Hall and Florencia Lozano about how they created a high-concept podcast with...

On this episode of the Audience podcast, Matt and Stuart talk about what it takes (behind the scenes) to make a great podcast, with... 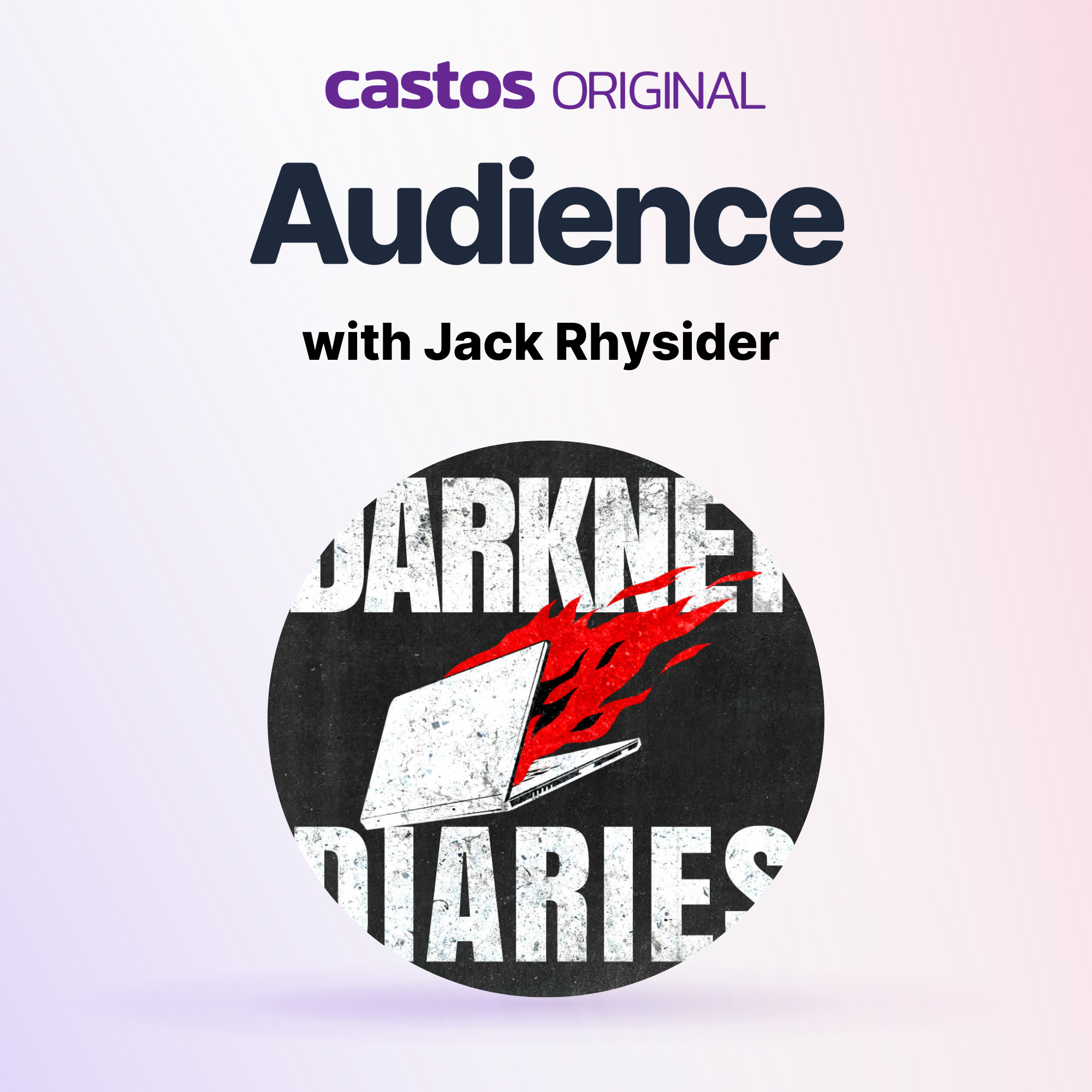 As work on new episodes continues, we're going to take a trip into our archives this week and listen in on a 3 Clips...