In this episode, Craig talks with Ed Freyfogle about his live event (Geomob) and the podcast that goes with it. With fifty episodes under his belt, Ed has a lot of great information to share about how he organizes interviews, records episodes, tips for new podcasters, and on the topic of podcasting as a business-related hobby. Ed also talks about how the podcast has been a great compliment to their live event and the perks of having both.

Ed Freyfogle is the co-founder of OpenCage (which provides a geocoding API) and organized Geomob (the live event and the virtual events). His podcast, the Geomob podcast, is a space where he and his cohosts can talk about the geo community, provide updates on their projects as well as interview prominent figures in the industry.

Ushering in a community for your podcast w/ Arielle Nissenblatt

On this episode of the Audience podcast, Matt talks with Arielle Nissenblatt about building a community around your podcast. There are so many great takeaways from this episode, from community engagement to building an audience, podcasting habits to monetization. Arielle lends her expertise in answering Matt’s questions about podcasting and Twitter. Arielle is a podcast expert in every sense of the word. She founded the EarBuds Podcast Collective in 2017, a podcast recommendation engine which sends a themed newsletter (including five podcast episodes centered around that theme) each week. She has also been the emcee for the Outlier Podcast Festival, attended the Salt Institute in Portland, ME for documentary studies, and has worked with podcast industry leaders to establish the Podcast Taxonomy system. The Podcast Taxonomy system aims to systematize roles for audio and podcast production. If you have any questions about this episode or want to get some of the resources we mentioned, head over to Castos.com/podcast. And as always, if you’re enjoying the show please share it with someone who you think would enjoy it as well. It is your continued support that will help us continue to help others. Thank you so much! Never miss another show by subscribing at castos.com/subscribe. Today you’ll learn about: Mental investments to building community Where to house your community Questions to ask to establish what your audience and peers want Beta testers as community members Where is your audience most active? Getting ... 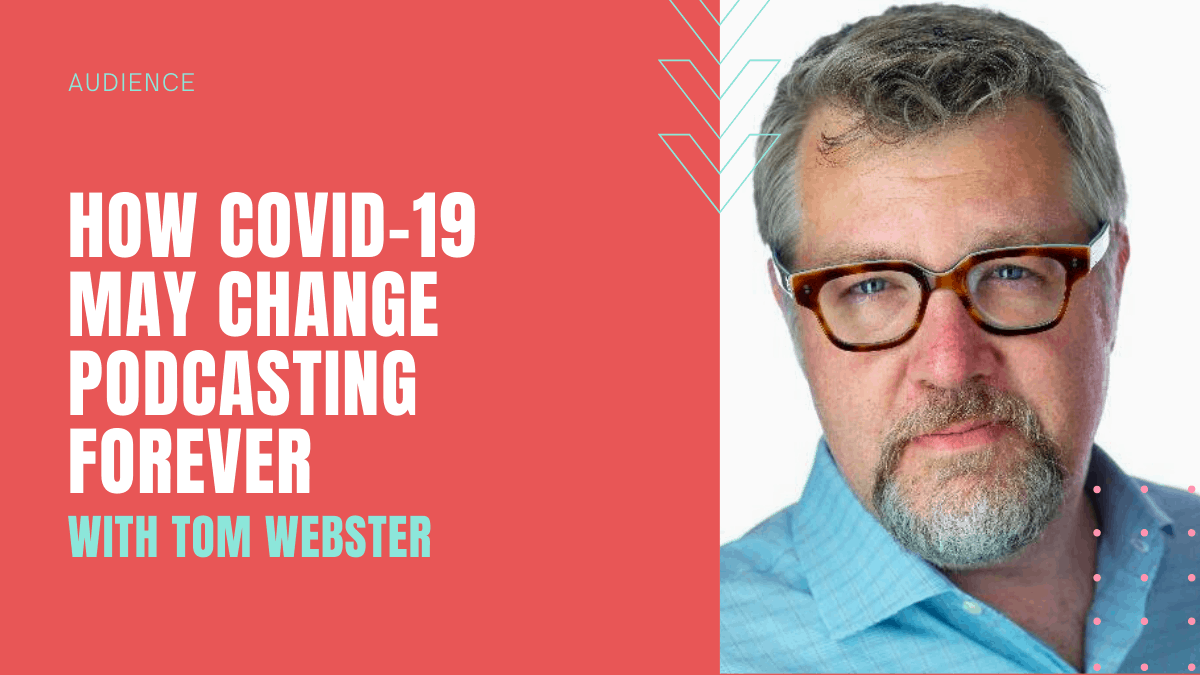 How Covid-19 May Change Podcasting Forever with Tom Webster

There’s no doubt that the Coronavirus pandemic has changed many of our lives, and for some aspects of our lives this may be a permanent change. Our guest on Audience this week is Tom Webster from Edison Research, the company behind the industry-leading Infinite Dial survey. In an earlier episode we recapped some of the biggest takeaways from the 2020 Infinite Dial survey, and thought we HAD to have Tom on the podcast to talk through some more of his interpretations of the data there, and what has changed since that time. The fact is that many of the lifestyle changes that we and our audiences have seen as a result of Coronavirus are here to stay and things won’t be returning back to “normal”. Here are some of the hard facts about listener behaviors as a result of the Covid-19 pandemic: Commutes to work or school have gone down – this is the #1 way and place that people listen to podcasts.Following external analytic tools like Podtrac and Chartable are great for Downloads, but may not tell the whole story from talking to actual listeners. Their behaviors are changing in different ways.Listening on smart speakers like Amazon Alexa has increased substantially as people are listening to podcasts in groups and at their homes.Initially, there was a big movement to news-based podcasts, but as the news overload settled in there was a movement away from it. Tom likens the disruption caused by Covid to a snow globe where once you shake it up the “snowflakes” of our lives go up in the air and sometimes don’t settle back down where they came from originally. That’s the theme that we’re following ...

Today I'm hoping you can share in the improvement of the Audience podcast by taking part in our survey. Head there now at https://castos.com/survey As you might know, Season 2 of our other podcast 3 Clips has come to close. That means Stuart will be joining us more regularly on Audience. We have some new concepts cooking for you, which I think you'll really enjoy. By visiting castos.com/survey you can help us understand what types of content you'd like us to produce. And hey, if that's not enough, you can always email us [email protected] and tell us what you'd like to hear. But wait, there's something in it for you as a podcaster! You've heard me say that feedback is important for your podcast and why not use a survey to do that? Even more so, how about using a free survey from a company that specializes in customer research? The survey I've put together is from a free survey framework provided by Edison Research. You can download their survey for free to use for your own podcast. Use all of the questions they provide or select the few that you think is most impactful for your podcast. I'll put the link in the show notes so you can grab it, too. That's what I did. I took some of their questions and added a few that are specific to Castos. Like, how do you plan on monetizing your podcast, if at all? By the way, if you'd like to learn more about selling your own subscription podcasts here at Castos, let's chat. Email [email protected] to book a time with me. Okay I think that's enough call to actions for now. Please take the ...